Yes, it’s been a few weeks…or months since my last entry. Sorry about that. It was, ah, life. You understand.

There’s nothing quite like waking up at 2:30AM to a raccoon making a late night snack of your kids’ mice farm 10 feet from your bedroom window. I’m sure it happens to you all the time. 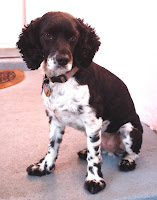 Well, last night was my first when I woke up to my dog barking at something on our screened-in back porch.  Now Tori is the kind of dog that barks if a frog croaks too loudly, chases dogs three times her size down the street, and challenges every passing car to a duel, but she’ll actually play tag with our two ferrets and doesn’t bother the wild rooster that’s taken up residence in our backyard. I don’t get it either. She’s a 20-pound cockapoo (half-cocker spaniel, half-poodle) so it’s not like she can defend our house from a band of robbers.

I originally got Tori for myself when she was a pup.  Tristan was 7, Tirzah was 2, and Tia just a few months old (yes, we even gave the dog a “T” name.  Pathetic).  I wanted a dog that didn’t shed (it was hard enough picking up after three kids, I didn’t need another).

What on Earth was I thinking?!  Getting a puppy with two kids in diapers?  I’m sure I must have been suffering postpartum stupidity.  Like I wasn’t already cleaning up enough poop with an infant and a toddler? But these kinds of fish you can’t throw back so after a year of toilet training—er, house training, repeatedly saving her from being crushed, eaten, and drowned by the kids, she promptly abandoned her disciplinarian mother and became Daddy’s little girl to my husband.  Ungrateful mutt.

Yes, I’ll admit everytime I have to spend a small fortune on her at the vet or the groomers I have this guilty desire that she’ll get run over by one of the cars she plays chicken with in our cul-de-sac. I don’t think I could be that lucky.

Now before you pet lovers call Animal Control on me, let me finish my story.

As she’s gotten older, Tori has mellowed a bit.  And so have I. She hasn’t chewed a single one of my leather shoes in quite some time.  Now maybe that’s cause I leave my closet door closed after numerous costly lessons, the taste of my stinky feet sweat have become distasteful to her, or she’s learned to value her life a little better.  Whatever the reason, we have begun to tolerate each other.  Except when she rubs herself in something disgusting in the neighbors yard and then wants to rub up next to me on the couch—I don’t THINK so!

So, anyway, back to my 2:30am wake-up call.  Dog barks, I wake up cursing her name because I’m sure she’s going to wake the kids, which will keep ME up another hour.  I get up and she’s not standing by the front door where I expect her.  No, she’s standing by the backporch door.  So, I flip on the porchlight fearful I’ll find some vagrant sleeping on our hammock, and…nothing.  Sure the back porch screen door is open again (darn kids!) but I can’t see anything threatening.  But, the dog’s not letting up.  So, I walk around to the guest bathroom door where you can see the three-tank mice farm we are “growing” for our two ball pythons and what do I see but a 20-pound raccoon INSIDE one of the glass tanks beating on half-dozen helpless mice and chewing off their heads.  I yell at him to “Git!” and like a cartoon character, he jumps nearly out of his skin, stumbles out of the tank screaching like a banshee, and flees out the open screen door.  I glanced over the damage (six dead mice) and think the snakes are NOT going to be happy about this since that was their dinner for the next day.
Then I get to lay in bed staring at the ceiling for the another hour thinking how in the world I’m going to break the news to my girls that one of their favorite mice, a “stud” male by the name of Chocolate, had become, well, raccoon-bait since they’d left the back door open.  I could practically feel their hot tears burning into my chest.  Sleep was a long time coming.

The kids took the news with dignity and—with Tori watching on like a sentry—we buried Chocolate next to Spike, a bearded-dragon that had died of osteoporosis three months before.  In our overwrought grief, we heaved the rest of the dead mice over the backyard fence and into the woods for the raccoons to finish off. Then my husband, who is the true instigator of the small petting zoo we now have, decided it would be a good idea to move the mice farm into our garage.  At least until we can make the backporch secure for our hapless rodents. Thoughtlessly I reply, “Sure.  Why not!”

Now besides dealing with roaches trying to feast on the dog food we store in the garage, wild frogs under my feet chasing the fleeing roaches and mosquitoes, wasps wandering in through a tiny crack in the garage door to build nests, now I get to deal with the stench of three dozen mice when I need to do my all-time favorite chore—laundry!

I think I’ll blame the dog for it all.  She was the start.  The first pet.  The beginning of the end.  Sure, she’s better (and cheaper) than any ADT alarm system, she inhales iffy meats or cheeses faster than a garbage disposal, and she really does have those amazingly expressive eyebrows and the cutest little stub-tail.  Still, I can’t help but wonder if I had just said “no” to the puppy all those years ago, I wouldn’t have to be standing over my washing machine illegally inhaling fabric softener sheets to block out the gaggible scent of mouse pee.