A Hundred Rabbits Out of a Hat

Mankind is pretty impressive. The things that we have created in just the last 500 years, to say nothing of the first 5,000+. 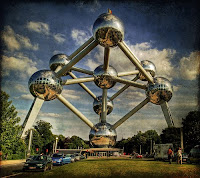 From horse power to horsepower, from printing press to e-books, from air balloons to Ares rockets, from daguerreotype to digital photography, from Robbie the Robot to nanotechnology, from the great library of Alexandria to the electronic library you can fit on a three-inch stick. To say nothing of architecture (Stonehenge to the Atomium, see right), art (cave drawings to the Sistine Chapel), music (water organs to full orchestral electronic keyboards), and dance (Egyptian rain dance to Broadway’s Lion King).
One thing you can say–yes, we certainly take after Our Father.
But truth be told, we are amoeba bumbling around in a petri dish compared to the original creator.

In the December 7th issue of Time Magazine, there was an article about 17,000 new species of underwater sea creatures recently discovered. Yes, that’s right–17,000. Everything from a small sea cucumber to a six-foot octopod with earflaps that earned it the name “Dumbo”. There’s actually about 10,000 new species discovered every year so in 2009 we’re really on a roll.

Now while on some continents there seems to be a full-blown race to see who can kill OFF the most species of wildlife on any given day, i.e, the rainforest massacres, the Creator keeps pulling not just one new kind of rabbit out of his hat (i.e., the striped Annamite rabbit discovered in Laos in 1999) but thousands of rabbits…and lizards…and insects…and plants.

Now while admittedly the newly discovered fanged frog of the Mekong River has next to zero significant impact on my daily life, it does make me think.

Keep up with me here: Scientists think we’ve only discovered 10% of all life on earth or about two million organisms. Heck, that’s the population of Orlando in December including all the snowbirds (another species unto themselves). Scientists actually think a more accurate number may about 100 million. Each of these species has some thing or some many things that makes them completely unique. And the grand sculptor made them ALL. 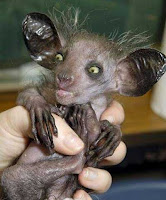 How long did it take him to fashion the Duck-Billed Platypus, a mammal so bizarre that when discovered, some thought it an elaborate fraud? Or the Blobfish, a muscle-less gelatinous mass that floats inches from the ocean floor? Or the Proboscis Monkey, a sure-fire ancestor of Jimmy Durante? Or the Aye Aye, the world’s largest nocturnal primate that resembles a cross between a gremlin and a fetal alien? How long did he ponder such creatures? How long did he take to piece together their peculiar DNA? (Well, since the creator exists outside of time and space, I don’t think he set a stopwatch for himself.)

I know how long it takes me to work on a single blog entry or a short story or–heaven help me–a novel. And yet even the tiniest microscopic creature is vastly more complicated than any piece of literature that, say William Shakespeare, created. And I–a human being–am vastly more complicated than either a protozoa or a play (although I think I’m easier to read than Hamlet). So how special does that make me? And you? And you?

Scientists think that there have been roughly 100 billion people that have lived on our planet since, well, since there were people. So when someone says you are ”one in a million”, they’re really way, way off. You’re infinitely more special than that.

So whenever you get down on yourself, whenever you bounce a check, forget to pick the kids up from school, or back into a light pole, i.e, whenever you think you’re a complete idiot. Whenever others question your intelligence–your high school math teacher, your boss, the guy behind you in the grocery line. When even the ones you love–and those who are supposed to love you–think you have completely lost it.