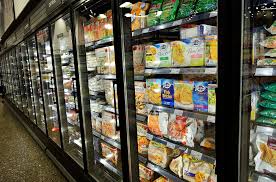 You gotta take your teachable moments wherever they come from.

I wanted to surprise my daughter. She loves Moose Tracks ice cream. So I was standing in the frozen food aisle hunting for the cheapest brand when I heard him.

Laughter from his girlfriend.

I got that awful sick feeling in my gut whenever I hear people using profanity in public.

I tried to ignore him and continue my dessert scavenging–Breyers, Edy’s, Häagen Dazs—

His girlfriend whispered something indistinguishable. Then he burst out, “You f—kin’ crazy!”

Besides us, there were three other people quietly pushing their carts down the aisle, searching for frozen pies, frozen fries, and Eggo waffles. Nobody but the trash-mouthed young man said a thing.

The words burst out of me. “Excuse me. Do you mind? Is that language really necessary?”

He looked abashed and then blew me off by throwing a “Yeah” over his shoulder, then he and his girl shuffled out of the frozen food section.

As I self-checked out of the store, running my hot dog buns, strawberry jam, and ice cream over the scanner and into the plastic bags, I couldn’t get the situation out of my head. I thought about it all the way across the parking lot to my car, pulling out into traffic, driving through my suburban neighborhood, and even as my garage door noisily closed behind me.

And I did what all of us do when we’ve had the opportunity to confront someone—I replayed the scene in my head thirty times thinking about the response I should have had—“Excuse me,” my voice dripping with sincerity, “if you’re trying to prove to your girlfriend how vulgar and illiterate you can be, I think you’re doing a bang-up job!”

But I’m no fast-thinking Robin Williams. I’m a writer. I write, edit, and then re-edit before I press send. What’s more, as a Language Arts teacher, profanity is like nails on a chalkboard to me. I spend my days teaching hormonally-imbalanced 7th graders how to communicate clearly, accurately, and succinctly so they don’t have to resort to obscenities.

An hour later while enjoying our Moose Tracks ice cream, my ridiculously mature and insightful 13-year-old explained why she thinks her schoolmates use a plethora of profanity on-line and off, and how it makes her feel. It’s amazing how similar our views are even with almost 40 years between us.

Most people use repetitive foul language because they don’t have the vocabulary—and probably education—to adequately express what they mean. It’s like the 20-something drivers whose pounding stereo bass makes the windows of the cars three rows back vibrate in their rubber frames. Or like the boys who wear their jeans so the world can read the name brand on their boxers.

But to my 13-year-old (and her over-the-hill-mom), they are anything but. They actually look kinda silly.

So besides enjoying a bonding time eating some Ben & Jerry’s, what do you do with such a moment? What we do with any question we don’t have a definitive answer to–you make it a teachable moment. I could share Ephesians 4:29, but she already knows she shouldn’t let any unwholesome talk come out of her mouth. I could share James 3:9-11 about the taming of the tongue, but I haven’t heard a curse word exit her mouth (yet).

So instead we sit back, ponder how grateful we are to know God’s word, and fight over who gets the last spoonful of ice cream.