Impressions in the Carpet 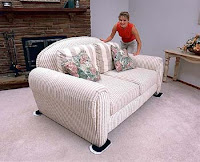 Re-arranging the furniture in your house can sometimes be a cross between Fright Night and Sherlock Holmes? It can be scary.  It can be revealing.  But usually it’s both.
Scary because you usually disclose the build-up of dust, dirt, popcorn kernels, and secretly disposed of Reese’s Peanut Butter Cup wrappers  that have accumulated in the cracks between the wall and the couch.  Revealing because you discover the lost key you frantically scoured the house for last week and finally replaced yesterday. Revealing because you find your favorite top that you accused your teenage daughter of swiping hiding behind the chair you draped it over. And especially revealing if you ferret out—or in our case, “out” the ferrets as we do have a pair of the little thieves—half your Wii accessories stashed beneath the crawlspace under the loveseat.

I’m undergoing a(nother) change of life thing (I guess multiple change-of-life things are something that comes with middle-age), so I got the hair-brained idea one night last week to re-arrange the furniture in my bedroom.  Now, this would be no big deal if I had a futon or a little twin bed with a laminated headboard, but I have an elevated oak four-poster queen-sized bed, two massive matching nightstands, and two very heavy, very full matching dressers.  Not to mention an assortment of luggage, gift wrapping accoutrements, tubs of old journals, and fitness equipment stashed beneath the bed (a ferret’s paradise).

I’m a fitness instructor, I told myself.  I can to this without any help.  I know how to lift heavy stuff without putting myself in the hospital.
Fortunately for my clients, this story isn’t about me torqueing out my spine and winding up in traction for a month.  No, I did move the whole room around by myself (well, I did illicit the help of a few neighborhood kids to heave-ho the floppy queen-sized mattresses for me). What did happen is that when I moved my bed and one of the dressers that had been sitting in the same place for six years, it left three very large, very prominent impressions in the carpet right in the center of the room.
Now I don’t have block parties in my bedroom, so it’s not like I’m concerned about what the neighbors will say about my carpet wrinkles.  But they kinda stand out every time I come in the room—one three-foot rectangle from the dresser and two circular four-inch indentations from two of the four bed posters.  I’d considered investing in a nice floor rug to cover the unsightly pockmarks in my new, larger space (I can do a one-legged down dog and not smash my toes on a dresser!).  I mean it’s going to take months for these indentations to unfurl themselves into their original shape.
But something changed my mind.
I recently came to the conclusion that I’m an addict.  No, it’s not drugs or alcohol or sex or food (well, maybe food).  No, I’m an addict to other people’s opinions of me.  I’m an addict to pleasing others to the detriment of taking care of myself.  Who could blame me? Like the other 99.9% of modern America, I was raised in a dysfunctional home life.  My father, who passed away over seven years ago didn’t–how can I say this delicately—didn’t always keep things on the straight and narrow.  I know he tried to do his best by me, but for some of my childhood, it was sort of like living with an alcoholic.  I was the daughter trying to win the love of a father by keeping family secrets.
And life wouldn’t be the hapless, chaotic, and often painful ride that it is if you didn’t boldly and purposefully carry your baggage into every other relationship that you have on the planet.

Those are my impressions in the carpet.  My handicap, my compulsive habits, my enabling behaviors.  If you know me and you are reading this, I’ve probably been co-dependent in my relationship with you as well (gotcha yaJ). For me, it’s as automatic as breathing.
But I don’t want to be that way anymore.  I’ve moved my furniture.  It would be great if I didn’t have these gouged out patterns in my life now, but they’re there.  As bold as brass.  I fall into them, trip over them, but they are not unfurling themselves quickly or easily.
It would be nice to cover them up with a pretty rug.  To pretend that they aren’t there. But I live in this room.  I walk through it every day.  Anyone who has eyes to see them can see I’ve rearranged things.  They can see the previous patterns revealed.  And for the first time, I think and believe that’s a good thing.  A very good thing.
It’s going to take a while for the impressions in my carpet to relax and release.  It’s going to take time for those dense fibers to return to the shape in which they were originally created.  I’ll walk through them, walk around them, and walk over them day after day, week after week, and month after month.  Until one day, I’ll wake up and the old impressions will be gone.  They may never completely return to their original design, but for all intents and purposes, it will be like they were never there to begin with.

And then I’ll go through another life change and I’ll have to move my furniture all over again.  Or maybe I’ll save my back and just string a hammock from the ceiling.