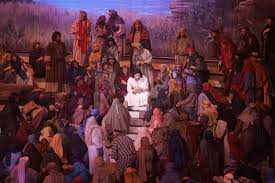 Last year, the teacher across the hall from me at school was nominated Teacher of the Year by her peers. It was my first year back in the teaching field after 12 years, and I didn’t know my peers well enough to vote with any kind of conviction, so I didn’t.

I felt privileged to be across the hall from her. I pondered all the things I could glean from her expertise.

But would I have felt the same way if we’d been teaching in the same school for several years? Would I have wanted to pick apart her teaching style, recall all the times she blew it, and remember her “down” days? Probably.

Familiarity really does breed contempt. You have to work hard for it not to.

So it’s not surprising that Jesus was also confronted with this same attitude when he returned to his ‘hood after a successful year preaching on foreign turf.

Those who knew him before he was famous said, “Who does he think he is? He’s no better than us. He’s just a carpenter, Mary’s boy [You remember, the girl who got pregnant before she got married. Yeah, that one.]”

It says that they were offended.

Contrast this with what happens a few verses later (vs 32-33) when crowds of people “ran on foot from all the towns” in the area just to sit at Jesus’ feet and hear him teach.

When others want to keep you a child instead of letting you grow up, when they don’t want to let you forget your past or move beyond their opinion of you, when nothing you say or do can change their mind about you, do what Jesus told his guys to do–shake the dust off your feet and move on (vs 11). They’re not worthy of you.

And realize you’re in great company.