Riddle Me This, Mother 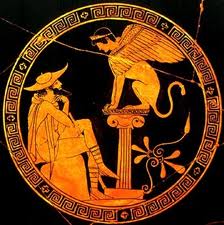 A man was walking hurriedly through a dense wood, a satchel cradled gently in his arms, when he came upon a fearsome creature blocking his path—a great sphinx.

“Let me pass,” beseeched the man viewing his destination—a small building—over the massive shoulder of the mythic being. “I have urgent business to which I must attend.”

The golden-haired sphinx tossed its head. “Only if you answer my riddle. If you guess right, you may pass unscathed. But if you answer wrong, I will eat you where you stand.”

Realizing that seeking out an alternate path to his destination would further delay him, the man replied, “Ask me your question.”

Delighted, the sphinx smiled revealing a double row of razor sharp teeth. “Very well. What creature has the feet of the gazelle, the fierceness of the bear, the heart of the oak, and the vision of the chameleon?”

The man laughed, shifting the satchel in his arms, impatient to complete his task. “That’s it? That’s your difficult question?”

The great beast frowned, its wings bristling. “I have dined on many a-traveler using this very riddle. Do you mean to tell me you know the answer?”

“Any child would know the answer,” said the man.

Sensing a trick, the sphinx pulled itself up to its full height, golden eyes locking on the man. “Then tell me,” it said, “what is your reply?”

“A mother,” said the man. “Like the gazelle, her feet are swift to catch a falling child or rush to their aide. As with the bear, only a fool would stand between her and her offspring. Like the oak, her strong heart secures her family and as they grow, they find solace in her shade. And no matter what her age, like the chameleon she has eyes in the back of her head, as any of her children can attest.”

The sphinx fumed. “How did you know when so many others have failed?”

The man pulled out a bouquet of flowers from his satchel, making sure none of the blooms were damaged. “Don’t you know what day it is?”

The sphinx stared from the man to the flowers dumbfounded before its eyes widened in alarm. “She’s going to kill me,” it whispered.

“Yeah, she can have the constitution of a tempest when her day is forgotten,” said the man.

The sphinx paled and swallowed. Then it turned and fled up the path.

The man rechecked the bouquet, pulled his satchel over his shoulder, and strolled up the path toward his mother’s tiny house.

P.S. Have a great Mom’s Day.  Make yours feel special.