What (I Think) I Missed

I did something today that I haven’t done in almost 10 years.

I wept for my son. My lost son.

Not my firstborn, Aiden, who was stillborn. But for my second. Tristan, my second child who survived my erroneous gene pool only to be lambasted outside the womb with autism. Apparently it runs on my side of the family, but most of the boys who display any markers of it have what’s called Asperger’s. It’s the type of autism where you can function fairly normal in society. You can have friends. You can almost understand sarcasm. You can take a change in your schedule without too much difficulty. You can fall in love. You can know and love God. You can venture out into the world, leaving the loving and protective arms of your parents and turning them into reluctant—though in some cases, eager—empty nesters.

My boy doesn’t have Asperger’s. But nor is he severely autistic either. Yes, I’m fortunate because he doesn’t sit in a corner lost to this world, rocking himself endlessly, never acknowledging his parents as I know many other severely autistic children do.

My baby—now 13 and on the brink of entering high school—is in the netherworld between those two extremes. In some ways, he’s like any other young teenage boy. He loves video games, bowling, and pepperoni pizza, although maybe not in that order. Did I mention that he really likes pizza? But anyone who met him would pick up right away that he’s, well,…different. He doesn’t “get” what personal space is. He can’t seem to grasp the concept of inside voice. And sharing with his sisters is dead last in his list of priorities.

Well, maybe he’s not really that abnormal for 13. But still, people notice.

And most of the time, I’m okay with that. It’s my life. It’s his life. We don’t know any thing else. I worked through my mourning of his never having a normal life when he was diagnosed with his challenges at age 3.

But it snuck up on me today. I mourned the life he will never have. He’ll never walk in my door, shy and embarrassed about his first crush. He’ll never watch the news and ask me why there’s so much pain the world. He’ll never get nervous about taking his driver’s test. He’ll never tear open a college application response in anticipation. He’ll never ask a girl to marry him. Most likely he won’t ever get baptized because he doesn’t have the capacity—at this point, anyway—to grasp sin, repentence, grace, and the Cross.

He’ll go to heaven, though. Oh, yes. Aiden has a special place reserved just for his little brother. And that thought, of course, led me back to God and the loaded question: “WHY?”

First, I don’t believe God is some helpless old man in the sky watching our lives go by powerless to act. Nor do I believe he is some wrathful Zeus ready to strike us down when we make the tiniest mistake. I believe God is omnipotent, omniscient, and omnipresent. He’s not confined by time and space. That’s why he’s the great I AM. He exists in all times—past, present, and future—all at once. So he knows, really knows, what’s best for us. And if he gave up his most precious son just so we can know him, what else won’t he do for us (Romans 8:28-32)? He really is the perfect Father. 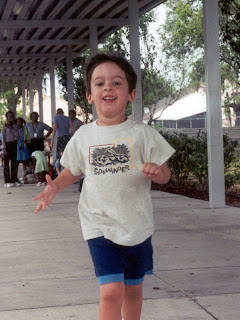 And in 40 or 50 years when I’ve run my race, after I’ve cried a few more times over what I think Tristan missed—or more honestly, what I think I missed—maybe then I’ll understand and finally be grateful that God knew what he was doing all along.